World Cup 2022 – Thomas Hitzlsperger: ‘You can’t be paid by Qatar or Fifa and criticise them’

“I asked myself the question and my answer was that they can’t kill my passion: I still love football,” Thomas Hitzlsperger says, but he knows they have tried. It is nine years since he became the first Premier League footballer to reveal he is gay, a decision that improved his life and those of others too. “Even today,” he says, “someone came up to me and said: ‘Are you who I think you are?’ I said: ‘Probably.’ He put his thumbs up, said: ‘Good on you.’

“And that’s so powerful, which is why I say to others: it’s not just your personal situation, which is of course the most important thing. And that’s why I don’t stop speaking up. Now when I reflect, my decision was all about what impact I can have on society, without overdoing it.

“You’d be surprised how many people you can reach,” the former Aston Villa, West Ham and Everton midfielder says, reflecting on the role of LGBTQ supporters’ groups, the increase in symbolism, a shift in attitudes at clubs embracing the gay community. He discusses how more athletes have stood up, how he “would love to see a big, active player come out”, and how there has been a “big, big change”. He says: “The environment is constantly improving in football, at least in most parts.”

And then on Sunday, the World Cup kicks off in a country where being gay is illegal. Only last week Khalid Salman, an ambassador for the competition, described homosexuality as a “mental defect”. Football enabled this, politicians and sports people have justified or normalised it. David Beckham has been paid to promote Qatar.

“It’s just wrong,” Hitzlsperger says, and nor is the “sickening” situation for homosexuals in Qatar the only aspect that concerns him. Indeed his discussion now, and the focus of a documentary he has just filmed in Qatar and Nepal, begins instead with the widow describing her husband coming home in a coffin, the workers he met who go unpaid. Those are the stories that have left him wondering where the line is. Not just their line – that, he thinks, is all too clear – but his own.

The former player – who represented Germany 52 times, played in a World Cup and a European Championship and won the Bundesliga with VfB Stuttgart – has grappled with how he should engage with a tournament he will be watching from a studio in Mainz for German television.

Even doing that meant examining his conscience; while others, such as Gary Neville with beIN Sports, have chosen to go to the Gulf state, Hitzlsperger says: “If I had the option, I wouldn’t: it just doesn’t feel right after what I have seen, the things I have said in public. You can’t be paid by Qatar or Fifa and at the same time criticise them, it doesn’t make sense.

“You see the world we live in: how sick it is that we allowed Qatar to buy the right to send pictures to the world for four weeks, presenting themselves as something they’re not. It’s not just sad, it’s sick.

“A Nepali worker told me he saw people collapse in the heat, so they’re put in a room to cool down for an hour, then you have to work again. The paperwork says: ‘Died in his sleep.’ That’s not the reason. The government says the Kafala system doesn’t exist but it still does, in practice. There are so many things you think: this must not happen. But it does. And to me Fifa allowed it to happen.

“I spoke to a woman from Human Rights Watch who said Qatari officials have figures but don’t publish them. I met a young woman there who tried to show me how open it was and when worker deaths came up, she said the criticism was not justified. She even used the phrase ‘fake news’. She doesn’t get to see it: she thinks the west is against Qatar. So it’s difficult to judge how many deaths there have been, but it’s not three.”

Three is the number the Fifa president, Gianni Infantino, claimed.

“People criticise Qatar, but we have to discuss Fifa’s role, those from the former executive committee who took the money,” Hitzlsperger says. “Because if no one would take it, if no one received it, Qatar would have a problem. But the greed in the football business is just immense.”

Fifa has since acknowledged these wrongdoings and the need for reform, in the 2017 Garcia report.

“There is so much money involved and some people have no morals and just take it. You find a PR agency, you pay them, and they give you a reason. I spoke to Fifa’s media department. They’re incredibly nice, kind people but they make you believe they’re trying everything to get the conversation going and it never happens, so they are smart. It would have been easy for Infantino to explain the improvements, the changes, to say why it makes sense to give Qatar the World Cup. He’s smart enough, but he refuses to speak: why? Why aren’t you more transparent?”

Instead, Infantino sent a letter to the 32 national federations telling them to focus purely on the football now. “That shows how fed up they are,” Hitzlsperger says. The Qatari organisers are too, some suggesting that racism lies beneath criticism.

“That’s totally understandable,” Hitzlsperger says. “Put ourselves in their shoes: there’s a point where you say: ‘Look, we’ve had enough, we’ve changed.’ And there has been change, probably more than in Saudi Arabia and other Gulf states. We have to mention in their defence that they’ve spent four years with the blockade as well. There’s probably fear. Hosting a tournament is a way of protecting themselves – as is investing in football clubs. I understand that.

“But the price is that it costs lives. And if you bring race into it: prove it, name the people who are racist. We have to understand that they know they can buy whatever they want: you offer people money, they take it. But suddenly there are people saying: ‘We don’t want your money.’”

The question is what can be done now? Hitzlsperger understands that more was not said or done sooner when real change may have been possible – “that’s just human nature and I’m not going to blame journalists as it wasn’t on the agenda: why would you talk about Qatar five years ago?” – and he has doubts about the efficacy of statements such as the One Love rainbow armband to be worn by 10 captains.

“The original idea was to get together among the European federations and come up with the best idea,” he says, “but the end product is an armband that possibly means a lot but doesn’t upset anybody. It becomes generic, people go: ‘What does it mean?’ Then they move on. It doesn’t start a debate. We know the rainbow flag symbol upsets people. People know what it stands for – and some in Qatar don’t like it so much. That’s stronger.”

There are broader conclusions. “The question has been why don’t teams boycott the tournament? They can’t even agree on an armband,” Hitzlsperger says. Besides, this goes beyond sport. “Not long ago the German FA president and the interior minister said they had been reassured by the Qatari interior minister that everybody would be safe. And you think: what world are we living in?! That someone has to give a guarantee!”

And the message may also be lost in the noise. “When it’s every day even people who agree think: ‘I can’t hear this any more,’” Hitzlsperger concedes. “I’m trying to find a balance between saying it, refusing to be quiet, and not saying it every day. It’s a shame: it destroys part of the game.”

Ah, the game. Hitzlsperger talks eloquently about it. He discusses the evolution in the German side since 2008, laughing about how they needed to get rid of him first and recalling a European Championship final where he could not get near Spain. He talks of Jamal Musiala, a player he can’t quite stop himself momentarily likening to Lionel Messi, concluding: “He said he wants to become one of the best in the world: I’d put money on that.”

And there’s a fondness for the England manager he first met at 18, recalling Gareth Southgate as a player “who stood out, smarter”, “a kind man”, a “modern leader”.

Yet that’s the point: for now at least, the game is lost, used and abused, taken from those for whom it is everything. Hitzlsperger is trying to resist, unwilling to let go. “I still love football but people come into it who don’t know what it means to fans, to players.

“Everything changes, money dictates everything. I don’t know at what point I will give up, go and watch Sunday league. But I still love it. It’s tiring: everything that has happened makes you not want to watch, but they haven’t managed to kill my passion for the game.” 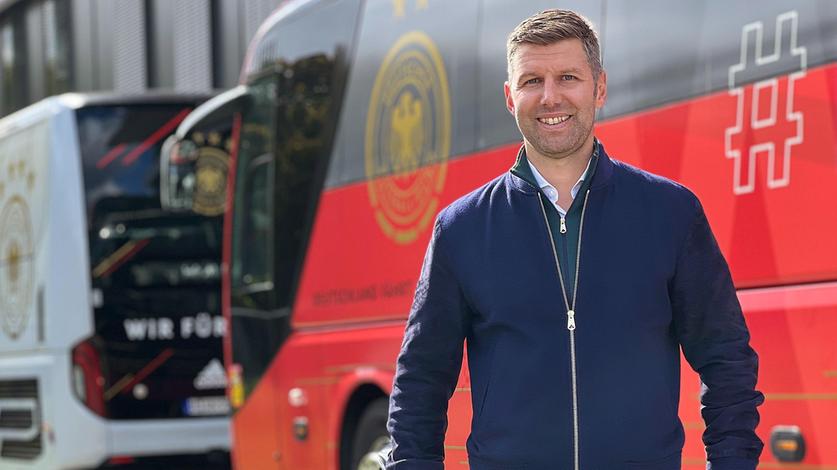